Migrating from one photo online community to another always involves a lot of effort. I had to move from Flickr to ipernity in November 2018. I was able to do this at least partially automated. The steps for this are described in this manual.

Note: The manual describes the status as of mid-November 2018. Plugins and software evolve over time. This means that at a later date various steps may no longer work in this way. Since I didn’t write the scripts myself, I can’t support them!

For the import we need the following software (the version numbers indicate the versions used by me):

After the add-on has been installed in Chrome it is advisable to restart the browser. Tampermonkey allows you to execute your own scripts on web pages. We have to install such a script now.

For this we call the page for the Flickr.importer script in Chrome (version 1.16). The installation of Tampermonkey automatically detects that the script is one for this add-on and offers the installation. We do this. Additionally we need the Flickr.album.importer (version 1.6). We also install this script. This completes the preliminary work.

On the website of ipernity there is an extra page for these scripts. Firefox is also listed there as a browser. In my tests this did not work. I did not pursue this problem however further since an import is possible over Chrome.

Transfer of the photos

In the first step we take the photos from Flickr to ipernity. This is done in so-called chunks with 90 pictures each. But this also means that we have to import a correspondingly high number of chunks if we have a correspondingly large number of pictures (almost 4,000 for me). So you have to bring enough time with you.

To start the import, switch to the so-called photo stream in Flickr. All photos are displayed there. The newest ones are at the top of this page and if you scroll down, the older ones will be reloaded. If you have installed the scripts mentioned in the prerequisites correctly, you will already see that a script is active for this page (by a corresponding icon in the address bar).

When the Tampermonkey script is called for the first time, a security prompt appears. Since malicious code can also be executed with such a script, this is also important. In this case we want to execute the script and this is correct. For this reason we give the question here. Whether this is temporary, only for this domain or always is at the discretion of each individual.

the photo stream is loaded we have to reload this page (simply press the F5 key on the keyboard). Now we see above an additional line of the add-on where we can start it (“CLICK HERE TO START Flickr set importer 1.6”). By clicking on it we start the program and the selection of chunks appears. 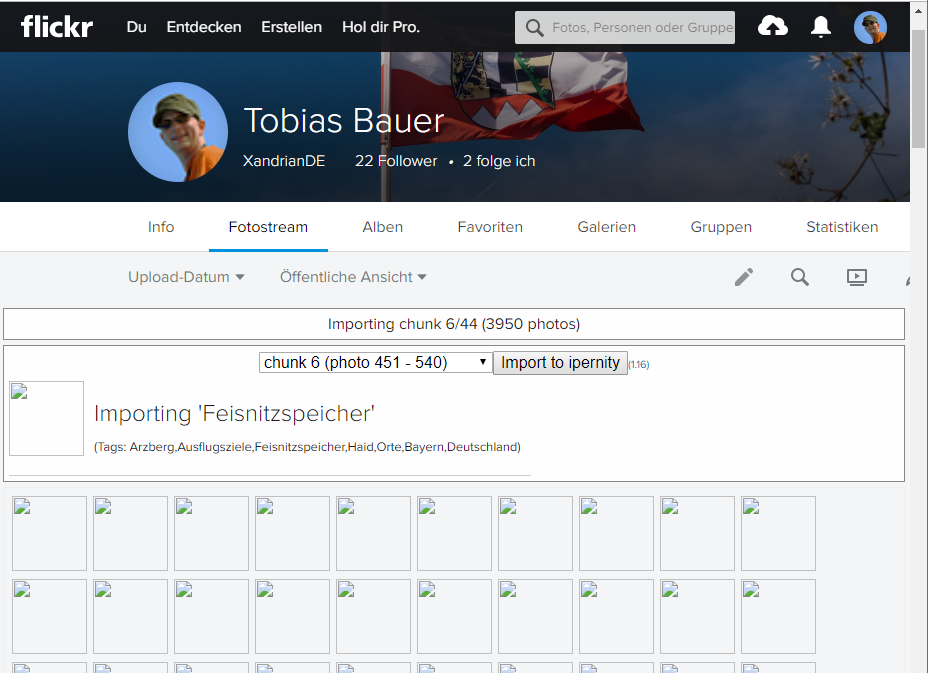 The import is started by clicking the button Import to ipernity. There appear (90) square thumbnails of the images which are imported (the preview never worked for me). As soon as an image is imported the “square” disappears. Thus one has a corresponding progress indicator. If the import of the chunk was finished, a corresponding message is displayed.

The selection drop-down box for the chunks automatically jumps to the next one. So you can easily import the next chunk.

From time to time (unfortunately much too often) the Flickr page causes problems and the photo stream cannot be displayed. Of course the import stops here. In this case you have to load the photostream again and hope that the problem is fixed in the meantime (and no panda appears). Then import the started chunk again. Already existing photos are not imported again.

With this method you “torture” yourself through your photo stream. As written this takes quite a while…

The photos are taken now. But if you have sorted them (like me) into albums, you want to use this information. This is also possible and we’ll do it now in a second step. In addition we can check whether all pictures were really taken over. The procedure is similar to the transfer of the pictures as described above.

To transfer the albums, switch to the albums in Flickr. There you have to go into each album individually and get the possibility to start the import like with the photo stream (after a reload with the F5 key). The albums will be created and the photos will be added. Now it is important to list the confirmation message. It says there that the album is now available (“Your album is now present on ipernity.") everything is fine and we can go to the next album. If not, then a photo was missing, which was uploaded additionally. Then we have to wait and start the import again. Then the success message should come. 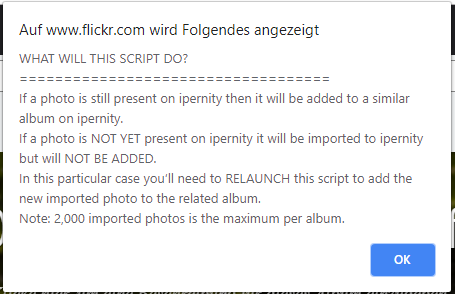 If you read the messages carefully, you will notice that you can also import the albums directly and don’t have to take the photos first. When you import an album, you can only import up to 2,000 photos at once and not just 90. So why go the detour via these two steps?

Well, that’s certainly due to the structure of the albums and their size. I have about 15 pictures in one album on average. That means I don’t benefit from importing more pictures at once. For this reason it is faster to import chunks with 90 pictures each first and then assign them to the albums. But this can look different with a different structure.

You can’t launch this script because…

This message appears if images are still being imported, but you want to make an assignment in albums. Here is a simple solution: wait! After a few seconds the images are processed and you can start the script.

Well, there’s not much you can do about the Flickr Panda. Wait, reload and restart the script. Unfortunately it comes much too often and of course slows down the data transfer unnecessarily…